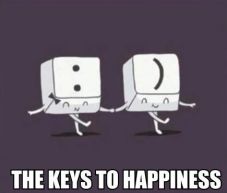 I read this on Wednesday at a place where I came for a job interview. Wrote it down. Had the interview. Two days later found I didn’t get a job, but that I came pretty close with getting it. That was a positive thought. And maybe it’s a good thing I didn’t get the job. I did a lot of thinking regarding it. And today I found that line. And it makes a lot of sense today.

So how is happiness homemade?

I read earlier today, browsing WordPress, that you cannot make others happy if you are not happy yourself. I expressed an opinion that well, you can, but not for long, because your being unhappy, even if you had skills to make others happy, will eventually catch up with you, and what you do, and who you are with. And then the blade will fall for them too.

That’s why I think happiness is not out there, somewhere in a mythical place, and we need to go through fog and fire, and over tall mountains to obtain it. We find happiness within ourselves. Even if we think our happiness is in others, I think it is our reaction to them that makes us happy. I may be with two people I sort of know, but they may be lovers, and I would never know what is it that he sees in her, while they mean a world to each other.

So, the happiness is something that we make for ourselves, and then we can share it with others. If I feel like crap this week, my girlfriend is still happy being with me, and me – with her, and I can feed on that to get better, even though I didn’t have it in me for a while. But if I am unhappy with myself overall, I will be looking for something positive, something magical, something to make me content, and I won’t find it until I look inside of me and try to create it, looking into what I am, what I’m trying to be, trying to achieve, trying to fix, and making steps toward making it a reality, coming close to that with every day if I believe it is important. Then, and only then, I think, I will be able to be serene with who I am and the world around me.

One of my AA group members was celebrating birthday the other day and he mentioned something regarding finding spirituality. He always opposed it, proudly considering himself an atheist.

And then he came to AA. And he still resisted spirituality. And he suffered because of that, knowing he should have given himself a break, yet he kept pushing it away for that’s what he did all his life. The struggle of inviting the spirituality in his life and resisting it at the same time was all consuming and affecting all the areas of his life. The metaphor he used for that time was being trapped under the bed. He wasn’t in his bed from where he could see so much in comfort, but instead he was under. Not only he was stuck in there as the bed pressed on him, he also didn’t have a very good vision of what was in front of him. He was trying to look out and see much more of the room, and out of the room – the house, and out of the house – to see the world around it, and yet he wasn’t allowing himself to do so. Once he realized that’s what was happening to him, the desire to push forward multiplied. And he… well, he crawled out in to the world, so to speak.

I cannot fully sign under these words. I was lucky to have discovered spirituality in high school, and although maybe not fully, I understood what it was and how it was making my life fuller. I was a loner, I believed in things I couldn’t see. I wrote stories about things others laughed at. I listened to music many people around me didn’t understand. Pagan rites of my native country were not something that a lot of people cared at the sunset of the 20th century. But to me it was the world rediscovered, and there was a spirit of wonderful kind, and its inhabitants danced, and they taught me things – of how we used to be, how we were simple and open, and how we could be so much better.

Still, many doors were closed to discover the Spirit and wisdom of simpler things, because I was influenced so much by the utilitarian world. Mythology of the Norse and ancient Greek, not what it stood for then, in old times, but what it taught, what it warned about, – these things were not something that concerned the world that worshipped money and technology. Information, selling it, expanding it, all of it was the major focus. And I opposed it so much that I started closing the doors on all of the real world. I started refusing to accept the life on its terms. It caused me a lot of grief. Alcohol became the permanent solution to that problem. Or so I thought.

Luckily, one day I woke up. By that time, I did a lot of damage to my mental health, so restoring the balance took years. But my beliefs in the spirit world, the wisdom, the care for simpler things, that didn’t get affected. The spiritual understanding of the world only got stronger, I think, because when I did wake up, the spirit within me stood stronger than before. The heart was thirsty for knowing things that rang true. The ears were open to hear the stories of others that taught so much. The eyes refused to shut, for there was much to see, right in front of me, and all around. The room, the house, and the outside, as much as it stretched.

Thanks for joining me!